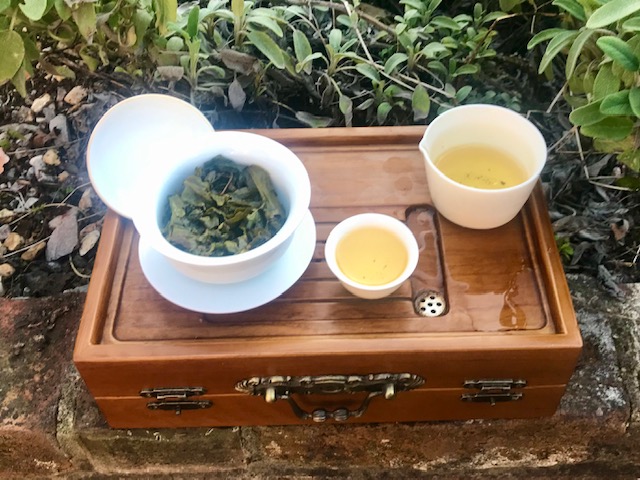 I recently bought a Chinese tea ceremony set (known as Gong Fu) after seeing it on offer on facebook. I’d recently been to Mei Leaf/Acumedic in London (a Chinese medicine supplier and tea shop) and my interest had been piqued. The set comprises a gaiwan (where you brew the tea), a jug to pour the tea (so it doesn’t steep too long in the gaiwan), tiny cups and a drainage box because the tea goes everywhere when you pour it in these vessels. With Gong Fu brewing, the ratio of tea to water is higher, the steeping time is shorter, and you get more brews. On the down side, you need a constant supply of hot water (I have a vacuum jug), and you use more tea. However, I enjoy the ritual of it, plus I appreciate the tea more this way. Now, I wouldn’t brew an expensive tea the English way, though I’m still partial to a cup of Earl Grey.

According to Peter Deadman in his book on lifestyle advice in the TCM tradtion, Live Well, Live Long, tea was orginally drunk in China as a medicine. According to the Zen Monk Eisai writing in 1211: “Tea is a miraculous medicine for the maintenance of health. Tea has an extraordinary power to prolong life.” Modern research agrees. A six-year study of 14,000 elderly Japanese found that those who drank more than seven cups of green tea a day had a 55% reduced mortality rate and a 75% reduced cardiovascular mortality rate compared with those who drank less than one cup.

Tea’s remarkable health benefits come from the antioxidant catechin. Research from the USDA suggests antioxidant levels in black and green teas are not significantly different. According to Chinese medicine theory, green and white tea is cooling, while black and puerh tea is warming. Oolongs become warmer the more they are oxidised (the process that creates black tea).